Our unmissable annual concert, complete with a surprise guest conductor and your own chance to conduct the band! 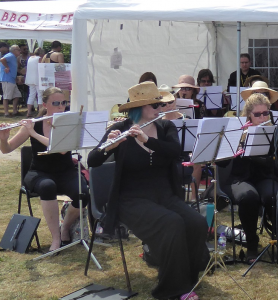 Shenley Festival – The band played a selection of Film Tunes, Songs from the Shows and other popular tunes to a busy festival, under brilliant sunshine.

Songs of Praise, with Pam Rhodes, the Amersham Acappella Choir and ourselves!
Come along a meet one of the stalwarts of Songs of Praise!

Our Annual Christmas Concert, proved to be a great success. Loads of money raised for Keech Hospice!

Our first performance at the Radlett Festival. A lovely venue, and a beautiful day!/

Our regular Christmas Concert in a heated church!

Our annual visit to Gawcott. A good audience for our annual concert

Our Christmas Countdown Concert! A good turnout on a cold night – the heating at the church had stopped working!

A calm, dry day for our trip to Harrow

Our annual visit to Gawcott, on a lovely sunny evening.

As usual we were dressed for the occasion, and raised over £800 for the Keech Hospice. We all had a great time, with the several people that is was the best concert the band has ever given.

A return visit for the band to play to hundreds of participants and supporters taking part in this huge fund raising event. With good weather, thousands of people turned out and tuned in to the sound of the band!

At Christ Church in Radlett, and very much on home turf with the band opening the show! And what a show, celebrating 150 years since the church was opened in Radlett. Many different groups played and provided an excellent range of entertainment for the audience, who were fairly packed in!

A return visit back to the delightful church.

Our Christmas concert, with a Film and Christmas theme!
We raised over £800 at the concert – and some busking we did in St.Albans

Our first visit back to Gawcott in a while – the church has been improved, and now has effective heating and a toilet!

Very much on home turf, the band played in Christ Church to raise money for the Peace Hospice. With a very generous donation from the Royal Bank of Scotland we raised over £500

8 September at the Bannister Sports Centre, Uxbridge Road, Harrow, HA3 6SW. A lovely summers day for the band to play to hundreds of participants and supporters taking part in this huge fund raising event.

In a busy summer of sport, we carefully planned the date of this concert to avoid too many major sporting events, such as the Mens final at Wimbledon, the finals of Euro 2012, the British Grand Prix. Some of the band like to follow these things! But all did not look good. Weeks of rain had left the ground waterlogged, it was raining everyday. Then the day came. It was dry. It stayed dry. The people who look after the Gardens had done a great job in preparing the ground. And so we played, giving a full concert with no interruptions!

The band took part in a spectacular production of Joseph and the Amazing Technicolour Dreamcoat at the Radlett Centre. This was a major production featuring no fewer than 4 choirs plus soloists, most from the Radlett area.

We welcomed back some old friends, the Essex Concert Band, for a combined concert, playing in the Old Chapel in Shenley Park, an excellent venue, and big enough for our two combined bands.

A glorious summers afternoon beckoned and it certainly was a hot one! We melted, we fried, we carried on! Hopefully next years concert will be a little cooler…

A relaxing afternoon return trip for us, on a rather warm afternoon!

A great acoustic for us to play in.

A lovely setting in the restored church

A return trip to a beautiful walled garden.

A first visit to Vision Hall, a lovely setting, for our first cream tea concert!

A Christmas concert in the magical setting of Holy Trinity church in the village of Gawcott, near Buckingham

A lovely setting for an outdoor concert

A first visit for us to this picturesque church in the village of Gawcott, near Buckingham

A welcome return visit from the Stevenage Choral society

A first combined concert with the Stevenage Choral Society

A Last Night of the Proms concert in aid of the nearby St. Pauls Church, which is undergoing major restoration. A great evening with all the Last Night favourites, as well as something a little magical!

At the Bothy for a very warm concert, featuring our newly formed Big Band, Little Phoenix.

A fund raising concert for the Church, in a joint concert with the Essex Concert Band, and featuring the newly restored Organ.

Fund raising concert for the School

A concert in aid of Riding for the Disabled.

Manage Cookie Consent
To provide the best experiences, we use technologies like cookies to store and/or access device information. Consenting to these technologies will allow us to process data such as browsing behaviour or unique IDs on this site. Not consenting or withdrawing consent, may adversely affect certain features and functions.
Manage options Manage services Manage vendors Read more about these purposes
View preferences
{title} {title} {title}